Okay so here is my (unfinished) game for Finally Finish Something jam.

Its meant to be a competitive local multiplayer thing that riffs off some mechanics from games like Samurai Gunn, Towerfall, and Nidhogg along with some action rpg-like character progression over the course of a match vis-a-vis DOTA / League.

However, there is not yet a win state and there are tons of bugs (its difficult to test a multiplayer game by yourself / with only the help of a four year old... although four year olds are awesome at finding bugs because of all the button mashing they do). Also there is no HUD or tutorial so I'll post some instructions on how to play when I'm not so pressed for time.

IMPORTANT: This game is a 2-4 player game meant to be played with XBOX controllers. There is no AI so if you don't have someone to play with there is no game, really. I don't expect many people to be able to test it proper... but I thought I'd put it out there anyway.

Fair warning: I ran out of time today so 2-3 sprites and 1-2 sound assets are not mine. I assume they ere free open source but who knows. Almost everything else is me.

Find some friends and plug in 2-4 Xbox controllers

Press B to create a blank character.

jump up on pedastal to take your player icon and join your team (red or blue) by pressing B.

use shoulder buttons (the bumpers, not the triggers) to pick your character

You can test out your characters moves in the select screen:

B: Melee or ranged attack (depending on who you are)

Y: character specific moves (theres only one each although I intend there to be 2 each plus an "Ult" in the final version

DO NOT KILL EACH OTHER on the character select screen/first room of the game. This will cause tons of bugs.

Once everyone has picked a team and a character start the game by pressing SPACE BAR.

Once someone touches the bird the camera will follow them

When you kill the person who took the bird he will drop a ball. Grab it and push the action left or right depending on your team (see above)

When you kill someone little bouncy balls of experience poitns will pop out: grab those.

Use both your triggers to TELEPORT to the blue torch nearest the action unless you are holding the bird.

If you see a statue with a crystal ball walk up to it and press B- if you have any banked experience points this will level up your character specific move.

The team who pushes all the way to the end and kills the other team's Boss wins (although there is no win state programmed into the game currently the boss does have a health bar.. however as of yet he does not have any attacks unfortunately)

Have fun, let me know if anybody gets to play it proper and I'll keep an ear open for what I'm sure will be tons of bug reports. Thanks guys. 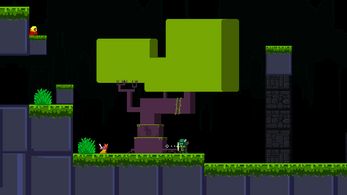